Posted on July 14, 2014 by International Cowgirl

Hey folks! Long time! I’ve been super busy between multiple farms and the horse rescue and church and home and…and…and….yeah, you get the idea. Lol. Who cares? Let’s get to the good stuff.

So my fiance and I hadn’t been out to an event together (alone) in some time so I saw PBR tickets for sale and decided to get some. I love PBR. There is just something about the bulls…can’t quite put my finger on it but I love ’em. 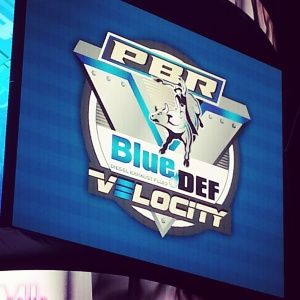 Anyway…so we get there, super excited, getting pumped up etc. I took a walk around and got kind of close to the back pen area. I chatted with some of PBR’s photographers and some other random employees which was nice.

The opening ceremony was AWESOME!

Our “Rodeo Entertainer”, Mike was HILARIOUS! 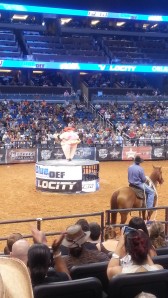 A big thanks to our other rodeo safety crew and Bobby – the lone cowboy on his horse. Major respect for these folks. 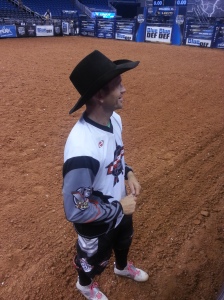 I was getting decent pictures on my camera phone (since that is all I would risk bringing in) so I do apologize if some of them are blurry. 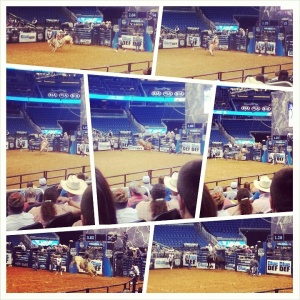 The mystery cowboy (#14???) signing autographs afterwards…caught me off guard by tipping his hat and calling me ma’am….LOL! That southern gentleman’s grace….always a good thing. His dog was beautiful too… 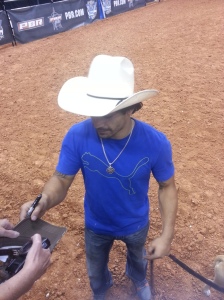 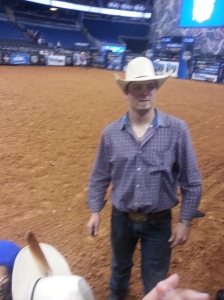 And last but certainly not least, Saturday’s Champion with 87.5 points: Jason Malone. 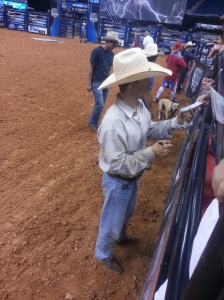 Despite injuring his hand, he did great and will keep on riding! He still plans on riding internationally in China later this year.

So it was a great night, had a ton of fun and hoping they will come back to Orlando again next year but honestly, with the poor turn out that was there Saturday and PBR having to have the help of Groupon and Living Social to sell tickets, there might be chance they don’t come back, which is a shame. With all the horse and cattle country down here in Florida, we’d love to have more professional rodeos down here. I am super excited about the Ram Circuit Finals Rodeo coming to Central Florida, though – that will be awesome!

You can always check more out at Professional Bull Riders .

This is a personal blog. Any views or opinions represented in this blog are personal and belong solely to the blog owner and do not represent those of people, institutions or organizations that the owner may or may not be associated with in professional or personal capacity, unless explicitly stated. Any views or opinions are not intended to malign any religion, ethnic group, club, organization, company, or individual. All content provided on this blog is for informational purposes only. The owner of this blog makes no representations as to the accuracy or completeness of any information on this site or found by following any link on this site. The owner will not be liable for any errors or omissions in this information nor for the availability of this information. The owner will not be liable for any losses, injuries, or damages from the display or use of this information.